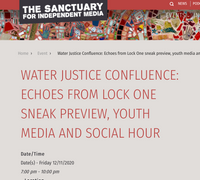 The opening evening features a premiere of the water justice documentary “Echoes from Lock One,” a participatory youth production with Q&A after screening.

Echoes From Lock One - Trailer from Catherine Rafferty on Vimeo.

Echoes From Lock One – Trailer from Catherine Rafferty on Vimeo.

About Echoes from Lock One

water justice and the legacy of the Erie Canal in one of NY’s most economically challenged and environmentally devastated neighborhoods.

Jayohcee also known as Corey Jocko is an hip hop artist, activist, and a First Nations Mohawk Warrior. Jayohcee is featured in Echoes from Lock One teaching youth how to write and perform a song through hip hop for their multimedia documentary and performing his Standing Rock song "Stay Woke".

Sachem HawkStorm, hereditary sachem (chief) of the Schaghticoke People, is a fierce advocate for the rights of his people as well as other indigenous peoples in the New York region and beyond. His work focuses on cultural heritage, education, and tribal sovereignty. He helped lead People’s Climate marches in 2014 and 2017 as well as the Native Nations Rise March in 2017. Sachem HawkStorm is an advocate for environmental justice and the preservation of indigenous land and waters. https://www.instagram.com/hawkstorm.forreal/ Heather Bruegl is the Director of Cultural Affairs for the Stockbridge Munsee Community. The mission of the Cultural Affairs Department is to protect, preserve and tell the history of the Stockbridge Munsee Band of the Mohican Indians. We do this through the archives at the Arvid E. Miller Memorial Library and Museum, protection of our ancestral lands through Historic Preservation, and revitalization of our Language. She is a member of the Oneida Nation of Wisconsin, is a graduate of Madonna University in Michigan and holds a Bachelor of Arts and Master of Arts in U.S. History. Inspired by a trip to Wounded Knee, South Dakota, a passion for Native American History was born. She has spoken for numerous groups including the University of Michigan, College of the Menominee Nation, Shawano County Historical Society, the Kenosha Civil War Museum, Stockbridge-Munsee Band of the Mohicans, and the Oneida Nation of Wisconsin. She has spoken at the University of Wisconsin-Oshkosh for Indigenous Peoples Day 2017. Heather also opened up and spoke at the Women’s March Anniversary in Lansing, Michigan in January 2018. She also spoke at the first ever Indigenous Peoples March in Washington, DC in January of 2019. Summer 2019, she spoke at the Crazy Horse Memorial and Museum in Custer, South Dakota for their Talking Circle Series. She has also become the ‘’accidental activist’’ and speaks to different groups about intergenerational racism and trauma and helps to bring awareness to our environment, the fight for clean water and other issues in the Native community. A curiosity of her own heritage lead her to Wisconsin, where she has researched the history of the Native American tribes in the area. In addition to that she also currently travels and speaks on Native American history, including policy and activism. PARTICIPATING YOUTH GROUPS

Water Justice Lab The Water Justice Lab fellows are taking a leadership role organizing and leading the Water Justice Confluence. This youth science mentorship program is a project of Media Sanctuary’s NATURE (North Troy Art Technology and Urban Research in Ecology) Lab Environmental Education Center and Riverkeeper. The project will establish a water quality sampling lab, educate diverse communities about water literacy and water civics (water issues and how to make a difference), develop the advocacy capacity of the North Troy area, and strengthen a network of environmental justice advocates focused on water issues in the Hudson River Watershed.

The Kingston YMCA Farm Project The Kingston YMCA Summer Youth Crew wrote and created a video called Truth Talk. As part of their summer experience, the youth read Stamped: A Remix by Jason Reynolds based on Ibram X. Kendi’s Stamped from the Beginning. Truth Talk focuses on what they learned about our history and how to be an anti-racist agent of change. Watch Truth Talk now…

The Green Team program hires local teenagers enrolled in the Yonkers Public School system for environmental jobs – for many, their first real job. The program focuses on leadership, group dynamics, and a variety of conservation and construction skills. This hard work is tempered with amazing adventures, like hiking, camping, and swimming.

Organized and hosted by Water Justice Lab, a new project of Media Sanctuary’s NATURE (North Troy Art Technology and Urban Research in Ecology) Lab Environmental Education Center and Riverkeeper. The project will establish a water quality sampling lab, educate diverse communities about water literacy and water civics (water issues and how to make a difference), develop the advocacy capacity of the North Troy area, and strengthen a network of environmental justice advocates focused on water issues in the Hudson River Watershed.